Don't Get All Of Your Eggs From One Chicken 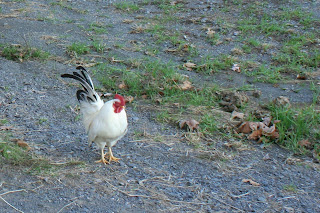 Tip #278 - Don't Get All Of Your Eggs From One Chicken. We all know the saying, "Don't put your eggs in one basket." Well, I believe we can apply that wisdom to how we earn money. Suppose we have one very good egg-producing chicken. We rely on getting our eggs from her day after day after day. But then one day a fox raids the hen house and there goes our source of eggs. Or our hen gets an illness and passes away suddenly. Or the egg gets too old to lay eggs. Now from where do we get our eggs?

As I am sure many unemployed people today can attest, earning all of your money from one source can be pretty scary if that one source dries up. No matter how great that source was at one time, many events can happen to effect it: The economy goes sour, and the business you work for is no longer produces as much. A small company's business owner passes away, and the company closes up shop. You are fired. You become incapable of doing physical labor that your job demands. That's why it is important to find more than one chicken from which to get your eggs.

Whether you are the main breadwinner or just earning some side money, it is important to have various sources of income. Or at least various ideas of where you can earn income if your main job goes south. Sometimes it is best if your alternate sources of income are in a different area than your main source. So an English teacher who can also fix cars may be more valuable than a teacher who can also tutor. Because if teachers are no longer in demand, tutors may not be either or there may be lots of other teacher who can tutor. But regardless of what you do to earn money, it is a good idea to at least think of other ways in which you can earn money even if you do not currently do them.

In Real Life (IRL) - In real life right now, I consider myself unemployed. I stepped away from my job over three years ago when my son was born. So while it is somewhat tight, we are living primarily on my husband's income. Because of the high-cost of the DC area and because we have three children who like to do activities and two parents who like to take vacations, I try to earn some money on the side while I stay home with our 3-year old. My main source of income is selling on eBay. I have built up a small business and a routine for making money on the world's largest auction site. In the past year or so, eBay commission or fees have gone up dramatically, leaving me with less take-home pay than before. While I still find eBay to be my greatest source of income, I have tried branching out to other venues to sell my wares. I've been trying to sell some things on Craigslist before listing them on eBay sometimes. Without any fees whatsoever, it allows me to sell things more cheaply, and is a good alternative for me.

Now all of this is chump change, of course. We're talking about additional money that we use to pay for my kids' activities or to put toward a weekend away. But the point is, several years ago, eBay was pretty much my only source of income. Then I discovered Craigslist and realized I could make money selling all of the big items that I couldn't sell on eBay. Then I learned about selling on Amazon, and single books that weren't worth listing on eBay were getting sold. Then I added the used bookstore to my list for books that weren't worth listing on Amazon. And this year, adding consignment stores and sales to my income-producing endeavors for items that are not worth selling pretty much anywhere else. Taking surveys are a nice steady source of spending money that doesn't rely on the demand or lack thereof from the buying public.

It never really occurred to me that I seek income from so many different sources until I got a few checks in the mail and some online deposits last week from many different sources - an Amazon deposit, a check from completing surveys, and a check from the consignment sale. And that's when I realized the wisdom of making money from different getting income from a variety of sources. And in this precarious economy, it is a smart thing to do.
Posted by Michele at 4:26 AM 1 comment: 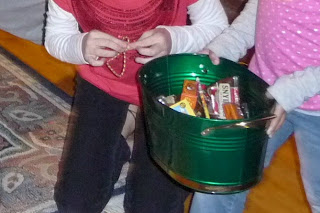 Tip #277 - Don't Discount Dollar Stores. Dollar stores often get a bad rap. "It's cheap stuff." "It's all junk made in China." "The things from there won't last." And most of those comments have a lot of truth to them. However, sometimes the cheap things are what we need to buy. Or we'd be buying them anyway for more money in stores such as Target, a party store, or an office supply store. And in reality, most of the stuff from these stores come from the exact same place as the Dollar Store. While I am not a big fan of disposable things and junk that piles up in our landfills, there are sometimes we have to buy throw-away items. And the Dollar Store is as good a place as any for buying this kind of stuff.

What the Dollar Store is Useful For:

--Birthday Parties - Goody bags and party supplies such as plates, cups, and napkins are the perfect items to buy in Dollar Stores. They are much cheaper than party stores, although the selection is not as good.

--Incentives - Stickers, pencils, and tattoos to be used for potty training, chores well-done, or when your children master some school-work are cheap enough at Dollar Stores and are often much less than at mass-merchandise stores.

--School Supplies - Glue sticks, staplers, tape, notebooks, folders, etc are typical Dollar Store items. There are usually great sales at the start of the school year for school supplies. But when you run out of things you need mid-year, the Dollar Store is a good place to stock up, and much cheaper than office supply stores.

--Travel - If you are taking a long car trip or plane ride and want to keep your little ones occupied, small toys that are new to them will occupy a child's attention and excite him more than his same old toys. For a few dollars, you can buy puzzles, activity books, and card games that you can dole out throughout your trip to make for some peaceful traveling.

--Costumes - If you need a cheap pirate's eyepatch or a pretty crown for a princess dress that just needs to last for Halloween night, then don't pay more than one dollar. Head to the Dollar Store first before looking to more expensive party stores.

There is a time and place to buy high-quality items that we want to last. But there are times when we need the cheapest thing possible. Cheap items may fulfill your need as well as an expensive one for a lot less money. That is when we can look to the Dollar Store.

In Real Life (IRL) - My daughter had her 9th birthday party last week. I am not one to usually buy a bunch of little, junky party favors to hand out. But we were having a game night party - bingo, charades, and trivia. And I promised prizes to the winners throughout the night. There were 10 girls total, and I estimated the girls would each win 4 to 5 games each, which meant 40 to 50 prizes. First I hunted through my party stash at home, which included goody bag items from left-over parties - mini-staplers, lip balm, and some card games. Then I headed over to our local dollar store and scoured the shelves. I found a 20-pack of decorative pencils for $1. Then I found a 3-pack of 4-color pens, as well as a 3-pack of mini-globe pencil sharpeners. I picked up a 4-pack of jack games, and a 6-pack of scented highlighters. For $5 I picked up all of the remaining prizes I needed for our game-night party.

At the beginning of the school year, we get a list of school supplies that we need to buy. Some of these items usually include zippered storage bags and a couple dozen glue sticks. The storage bags are used to send home simple projects and usually store pieces of paper. (I volunteer in my daughters' school once per week, and I have had fill these storage bags with small pieces of paper. Some of the bags the teacher gave me that parents had bought were high-priced, thick freezer bags that were being wasted holding pieces of paper. Thin, cheap, no-name storage bags would accomplish the same task. Those freezer bags are expensive!) Our dollar stores carries the cheap bags, which aren't good for freezing meals for the winter, but are perfect for children to bring home schoolwork. I also saw 3 large glue sticks per pack for $1. Our school generally asks that we buy the large glue sticks rather than the small ones that are always very cheap during back-to-school sales. At Wal-Mart, we paid $3 for a 3-pack of large glue sticks. They were the cheapest I could find. But I forgot to look at the dollar store. Next time I will remember.

There were other great supplies there like small staplers and rolls of tape that my kids borrow from me for craft projects all the time. For $1 a pop, it's worth it for them to have their own. I don't care if the tape is cheap when it's just used for kids' projects. There were other items there that were worth a look for future emergencies. I saw an 8-pack of cheap shower caps. Not something I'd normally use, but this past summer when we were blessed with lice, they would have been very handy to have.

So while I am not generally a fan of cheaply-made plastic junk, there are times when I have to buy these types of items. And why not spend only a dollar for them rather than more at other stores?
Posted by Michele at 6:52 PM 4 comments: