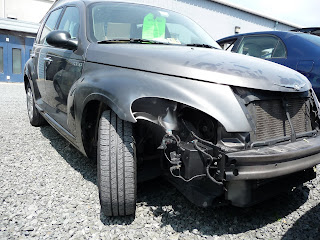 Tip # 293 - Prepare For Emergencies. In almost any financial article you read these days, you will see advice to have an emergency fund. Often it says the fund should equal 6 months' to one year's worth of expenses. But beyond that, these articles often do not give you much guidance. What constitutes an emergency? Should I have contingency plans? Do I need to consider all of my expenses? How do I deal with emergencies physically and emotionally as well as financially? What do I do after the emergency is over?

Each person's interpretation may be different on what is shattering. To someone in dire finances, the cost of a new radiator may be. So the first step in preparing for emergencies is to figure out what an emergency is. It might be the same as my definition or slightly different. Most likely it will have the sudden and unexpected component to it. The "shattering" component may be slightly different depending on your financial, physical, and emotional circumstances. To some a car breakdown even if sudden and unexpected is emotionally draining and possibly financially draining and would constitute an emergency. For others a car breakdown is no big deal either emotionally or financially. It might make sense to put a dollar amount on your shattering portion - something like any sudden and unexpected event that costs over $1000 is considered an emergency. Or any sudden and unexpected event that will cost us over $200 each week for the next month is considered an emergency.

So, our first step in preparing for emergencies is to define what an emergency is. Then we can figure out the following steps - which is meeting the emergency head-on. We'll discuss them in future posts.

In Real Life (IRL) - I've been thinking a lot about emergencies lately because we've had a lot of potential ones. At the end of July, my dad told me that he had prostate cancer. He is 74, and fortunately it is slow-growing form of cancer that is treatable. Nevertheless, the "C" word, which I hate more than almost anything, is scary. While the financial consequences for me aren't really affected by my dad's diagnosis, my emotional ones and physical ones were dramatically. I had a hard few days digesting this information, and living far away (3 hours), it has some physical constraints, too.

But that wasn't the only piece of "emergency-like" news I heard. A day after my dad told me his diagnosis, my husband called me from work and told me that he got word that his office is closing at the end of October and that he was offered a job at the home office in North Carolina. While this news wasn't totally unexpected as they gave us warning a year ago of this happening, in May they told us there were no current plans to close his office. So it was somewhat unexpected timing, and the date seemed sudden as I thought they'd give us 6 months' lead time. If my husband takes the job, then there are financial consequences of moving, packing, selling the home, travelling to find a home, renting or buying a home, etc. If we don't move, we have other financial consequences of looking for a new job or being without for awhile. Combined, my dad's news and the job news, was making me an emotional wreck.

A few weeks went by and things settled a bit as my dad found out treatment options, and my husband and I did a scout out of neighborhoods in North Carolina and considered some options locally. Then one day in mid-August, our house starting shaking and things started falling off the walls and bookshelves. An earthquake had hit Virginia. Scary indeed! And while it didn't end up being an emergency, it certainly opened my eyes to how an earthquake could easily cause one! And of course, a few days later, we were in hurricane-preparedness mode. Fortunately, it turned out to be a non-event here, but in the past we've had a flooded basement, downed trees, and no electricity as the result of a hurricane, so I know how quickly that can become an emergency.

So to say that emergency preparedness has been on my mind lately would be an understatement. It has made me evaluate our preparations for emergencies in life - not just financially but emotionally and physically, too. I'll discuss these further in my next posts.
Posted by Michele at 9:21 AM 4 comments:

Most Everything Is Sellable 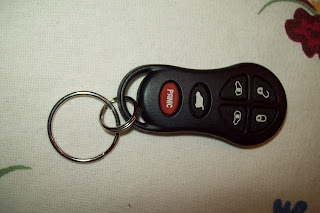 Tip #292 - Most Everything is Sellable. Back in the days before the Internet, you might try to make money by putting up a sign at the local grocery store advertising your old lawnmower for sale. Or you might put a placard in your car announcing its sale. But you would never dream of selling your extra garage door remote or the brochure or manual that came with your brand new 1972 Chevrolet Nova. Maybe you'd put some stuff out in your next garage sale and earn a quarter or two off of your old things. But most likely you'd throw away your brochure when the car was junked. The garage door opener remote would probably be thrown in the back of the drawer in case you met someone who has the same garage door opener brand and model as you.

Well, those days of the pre-Internet are long behind us. And today most everything is sellable. Things that may have once been considered junk to you are thought of as prized possessions for someone across the country or halfway around the world.

So this tip is: do not throw anything away until you have checked whether it has value or not. Do not just assume that what you have is junk. An old pen from Pan-Am Airways? It might be worth a few bucks. Your son's set of chapter books that he is no longer into? Probably has some worth to someone. An old brochure from a 1950's range - chances are someone wants it. A keyless remote to your old car? Likely that someone wants it.

Of course not everything you have is sellable, but chances are there are more things that have worth than you realize. So before you throw things out, check online - eBay is probably your best bet - to see if items like yours are selling for any money. And if they do, put it up for sale and make money on your unwanted things. Happy selling!

In Real Life (IRL) - Again, I've been away for weeks. No excuses, I just haven't made blog writing a priority. And in the past week, I've been house hunting! We finally found out for sure that my husband's office is closing this fall. And I am realizing how much I need to get rid of in my house before we sell it. So much to do! Part of what I realized when going through our things is that a lot of these things that seem like junk may be useful to someone. We have an old 2001 Dodge Caravan brochure (from our car that kicked the bucket last month). While it has no use to us anymore, I am sure there is someone out there who owns a 2001 Dodge Caravan who would like to have the glossy brochure and specs from his car. My husband also has a bunch of other brochures from different times when he was car hunting. He just handed me a pile and asked me to see if there's any worth for them on eBay. And a cursory glance shows that some of these brochures do sell. Who would have thought? Certainly not me! I would have put them right in the recycling bin.

Unfortunately looking up and selling items takes a lot more time than throwing away! But if I think they will make enough money, then on to eBay our junk will go. What kinds of things do you have laying around that may be worth money that at first glance wouldn't seem like it?
Posted by Michele at 11:00 PM 3 comments: